When we work in industry, it is common to see new strategies implemented regularly. This generally happens every 3 to 5 years depending on both industrial cycles, and appointments of top management. Specialized consultancy firms are very familiar with this. They work on these changes and adaptations as they constitute companies’ legitimately need.

By way of reminder, “strategy refers to  all the decisions and actions that guide, in a determining way and in the long term, the mission, core businesses and activities of a company, as well as its organisational and operational model”, (Olivier Meier, International Management and Enterprise Strategy Researcher).

At the macroscopic level, the diagram above illustrates a company with its strategic dimension. 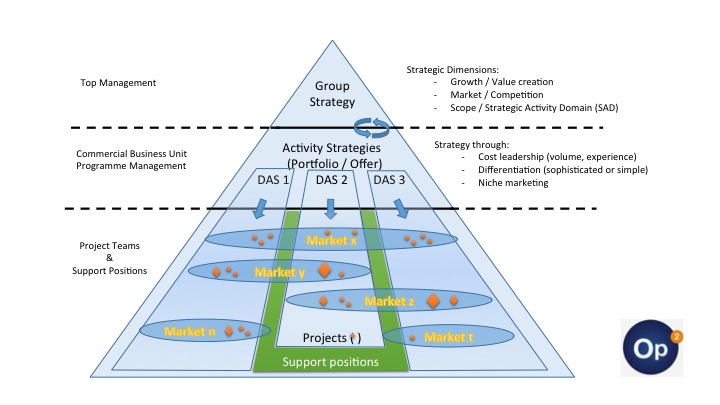 Not noble or visible enough for Top Management?

The goal here is not to revisit the entire strategy, but to examine one point that is often overlooked, probably due to the less “noble” and less visible aspect of the task.

Indeed, launching a new offer, tackling a new market or even an internal transformation with, in particular, reduced structural costs and thus a “job savings” scheme are the main goals and resources embodied in company strategies today.

However, industry tends to operate in a project-based world  although this aspect is rarely included in the strategic decision-making process of companies. And yet, irrespective of the strategic aspect or the choice of strategy for Strategic Activity Domains, the project dimension has a part to play.

Let us take the example of  value creation , or business model. Companies that work in project mode generally delegate their execution mode to middle management and when it comes to defining a new strategy to gain a few EBIT points, the issue of project performance will in general not be examined.

While 80% of current projects do not meet their goals (see studies by Standish Group), they have a direct impact on the bottom P&L line. And wrongly so. Thus,  the company either tries to reduce cost in any way imaginable, most often involving support positions and in particular imposing highly ambitious targets on purchasing, or it implements the resources to reach the expected performance. I have yet to come across the latter case.

Project performance is in fact at the heart of company development

I will use the real example of an organisation which set the goal of a 10% of EBIT. The rules and procedures for this are defined and followed: the project margin corresponding to the goal is determined and all offers are reviewed and only those that meet this target are validated. Yet  the overall closing balance sheet shows between 5 and 7%. The company concerned, during its strategic review, therefore decides to implement a scheme to reduce hourly rates and rationalize support positions. But the real cause of this degradation is none other than the performance of projects that themselves always come in from 5 to 15 points below target, directly affecting EBIT by 3 to 5 points…

Project performance is in fact at the heart of the enterprise. It determines its output, and its development, adaptation as well as transformative capacity. In fact, in the example given above, the company did reduce costs for some time. This had a significant incidence on the workload of employees, leading to better profitability and competition for the current projects. Unfortunately, failure to integrate project implementation in the new strategy has led to unintended results. As long as the new rates and margin goals are applied, without achieving the performance level forecast, the balance sheet will always be the same, showing a reduction in benefits

The same is true for a company that decides to take on a new market. The commercial strategy needs the support of project execution reaching the defined objectives. Therefore, the general strategy must indeed include a projects performance aspect.

The Project strategy: a recognized efficiency!

This is what we call Project Strategy! A different strategy whose results lead to an increase in margin points in accordance with its targets, taking on new markets or providing new offers based on performances of which the enterprise can be confident. On this point, an article for l’Usine Nouvelle on the challenges that Henri poupart-Lafarge, CEO of Alstom, meets perfectly illustrate the need of this strategy: « Une meilleure préparation et une plus grande sélectivité des appels d’offres ainsi qu’une exécution mieux maîtrisée seront essentielles à Henri Poupart-Lafarge pour pousser sa marge dans le haut  de la fourchette (5 à 7%) qu’il s’est fixée »* (translation : « A better preparation and an increased selectivity of bids with a an execution under control will be essentials for Henri Poupart-Lafarge to push the company margin within the 5 to 7% range, the goal he sets »).

This strategy also meets the definition from Olivier Meier because:

It is remarkable, in this respect, to note that enterprises where Top management integrates the projects performance within their general strategy have better results that similar companies who does not take it into account.

So the switch from a Strategy Project to a Project Strategy takes boldness, awareness, motivation and the right people.